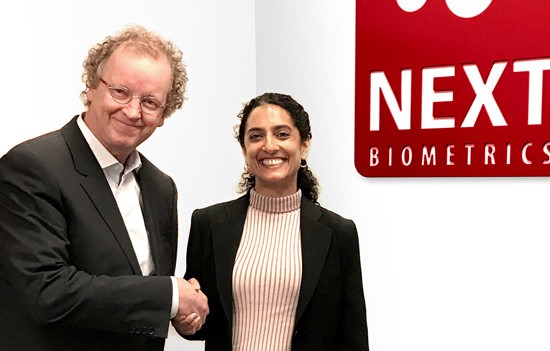 The board of directors has appointed Ritu Favre (48) as new CEO of NEXT Biometrics. Favre has extensive experience from both the semiconductor and the fingerprint sensor industry. The present CEO, Tore Etholm-Idsøe (57), will continue to work full time for the company as Chairman of the Board.

Ritu Favre holds a Master of Science degree in Electrical Engineering and has worked fifteen years in Motorola as a Manufacturing Manager and Manager of Business Product Operations, before joining Freescale Semiconductor, where she worked for 11 years. Her last position in Freescale was Senior Vice President and General Manager RF Group.  For the past two years Ritu Favre has been Senior Vice President and General Manager of the Biometric Products Division at Synaptics.

NEXT Biometrics Chair Brita Eilertsen comments: ”We are very pleased that Ritu has agreed to take up the CEO position, and we believe she is the right person to establish NEXT as a leading supplier in the fingerprint industry.  There is a strong need for semiconductor experience in the next stages of the company´s development.  New generations of ASICs will further enhance NEXT competitivness and long term position as a leader in Smart Cards and other segments of the biometrics industry. Ritu has extensive semiconductor experience – and also knows the biometric industry well after heading the biometric division of Synaptics.”

Tore Etholm-Idsoe comments : ”Given our present status we are well positioned to grow sales in Smart Cards, Notebooks and many NEXT-Enabled segments. We need to increase top and middle level management capacity significantly. Having proven ability to build operations serving Tier 1 customers with more than 100 million sensors annually, Ritu is perfectly positioned to take the company to the next level. Combining this with her technical background and deep understanding of ASICs she is a perfect fit for NEXT.”

Ritu Favre: comments :  ”Having followed NEXT over the last few years, I see great potential in the technology and markets, and am very excited to be given the opportunity to develop the Company further as its CEO.  I look forward to work with the Board, the Management Team and employees with the goal to capitalize on the potential of NEXT. ”

Ritu Favre has background from India and has a deep understanding of the country´s culture and language, which will greatly benefit NEXT as the company seeks to exploit the vast opportunities in the Indian market.

In additon to being Chairman of the Board Tore Etholm-Idsøe will dedicate his time to supporting Ritu in developing the company´s Smart Card business and further strengthening of the company´s position in the capital markets.

Ritu Favre will take up her position as CEO in the near future. Tore Etholm-Idsøes position as Chairman of the Board is backed by all present board members and is subject to final approval by NEXT General Assembly.